The rise to international fame of Cob Records, Porthmadog began very inauspiciously in 1967 by selling ex-juke box singles at 1/6d. (7½p) each as a back-room side-line in conjunction with an existing Cob business. It soon became apparent that there was a demand for current LPs and Singles as there was no record shop in the area. Accounts were then opened with all the record companies and the whole basement of the existing business was fitted out as a record shop. Although LPs were only 32/6d. (£1.62) in those days they were still not affordable to many, so we offered a service of “any 3 of your old LPs for any 1 new of ours” and before long we had a large selection of used LPs along with our new stocks. We still operate a similar service, but in today’s more complex market we now offer a part exchange price against the new items required; alternatively, we buy unwanted items for cash. 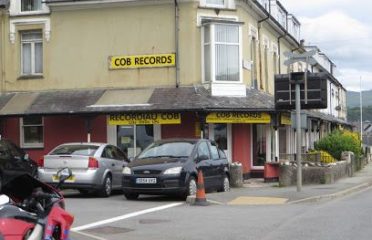